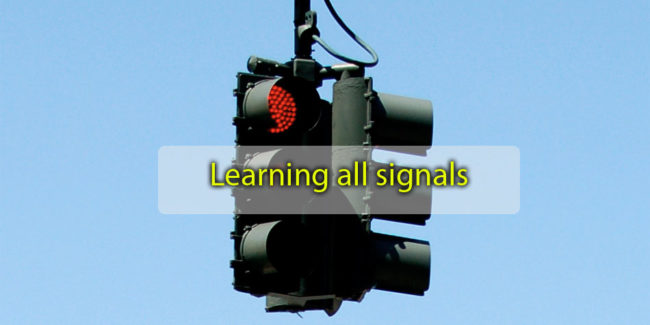 But that is not what DMV will ask you on the knowledge test. Questions usually go beyond the very basics. Make sure you understand all variants of highway traffic signals, what you can do and you must not do.

Let’s start with the green light.

The solid green light (green ball) means that you may proceed through the intersection and make a turn unless turns are prohibited by another signal or signs.

Question 1: When a traffic signal turns green, you:

CORRECT ANSWER: B.
Before entering and intersection on the green light, you must give the right-of-way to any vehicle, bicyclist, or pedestrian that has lawfully entered the intersection. You must also avoid entering the intersection if you cannot get completely across before the traffic signal light turns red. If you block the intersection, you can be cited.

A green light does NOT give you the right of way.

The yellow traffic signal light means “Caution”. It warns you that the signal is about to turn red. During the “yellow phase”, vehicles are expected to clear the intersection.

When you approach a yellow light, you should slow down and stop, if you aren’t too close to the intersection to stop safely.

There are three different yellow light laws in the United States. The permissive yellow law allows you to proceed during the “yellow phase” if you don’t speed up to beat the red light or block the intersection. The other two are restricted yellow laws. Read about them here: Drive Against A Steady Yellow Light.

Question 2: In all states you may continue carefully against a yellow light if:

The red traffic signal light means “Stop”. You cannot proceed through an intersection when the traffic light is red. You must remain stopped until the signal turns green.

The most common exception to this rule is the right turn on red. After coming to a complete stop and yielding to bicyclist, pedestrians and turning vehicles from the opposite direction, you may make a right turn on red unless a “No Turn on Red” sign is posted. This is true in all states.

Local ordinances may, however, prohibit all such turns even if state law allows them. The most notable is New York City where all turns against red are prohibited.

Most states also allow a left turn against a red signal if you are turning from a one-way street onto another one-way street. All left turns against red are prohibited by state law in Connecticut, District of Columbia, Maine, Missouri, New Hampshire, New Jersey, North Carolina, Rhode Island, and South Dakota. Again, local ordinances may override the state statutes.

A few states (Alaska, Idaho, Michigan, Oregon, and Washington) allow the left turn against red from all streets as long as the street you are entering is a one-way street. For a comprehensive list of states that allow left turns against red visit axleaddict.com

Question 3: Which light indicates that you must always come to a complete stop at an intersection?

CORRECT ANSWER: A.
Red means stop. You must always come to a full stop. If turns against red are allowed, you may not make the turn before stopping and yielding. “A rolling stop” is not enough. For the yellow signal, see above.

Look for the paragraphs explaining the red arrow signal in your driver’s manual.

Under the rules of the red light, traffic from opposite direction may still make a right turn after stopping and yielding. Traffic in a left lane may also face green arrow allowing left turns from the opposite direction.

Before turning on a green arrow signal, watch for other traffic and yield to vehicles that lawfully entered the intersection and haven’t yet cleared it. The green arrow means that your turn is protected by red signals – it does not give you the right of way.

Question 4: When a traffic signal is showing a green arrow, you must:

Question 5: When a traffic light shows both a red light and a green arrow:

CORRECT ANSWER: D.
A driver in the proper lane may turn in the direction of the arrow without stopping, if the way is clear.

The yellow arrow basically serves the same purpose as the solid yellow light. It tells you that the protected-turn period indicated by a green arrow is ending. You should slow down and be prepared to obey the next signal.

CORRECT ANSWER: A.
The protected-turn period indicated by a green arrow is ending.

Before turning against a flashing yellow arrow, make sure that oncoming vehicles aren’t a hazard and that you have enough time to complete the turn.

Question 6: A traffic signal with a flashing yellow arrow means:

CORRECT ANSWER: B.
A flashing yellow arrow indicates that turns are allowed and not protected.

The most common DMV questions about traffic signals deal with the flashing red signal and the flashing yellow signal.

If you remember that red means stop and yellow means caution, you should have no problem answering them correctly.

Question 7: When a traffic signal is showing a flashing red light, you must:

CORRECT ANSWER: A.
The flashing red signal means you mean come to a full stop at the stop line. After yielding and making sure the way is clear, you may proceed. You don’t have to wait for a green light (there won’t be any).

Question 8: A flashing red traffic signal at an intersection has the same meaning as:

CORRECT ANSWER: D.
The flashing red signal has the same meaning as a stop sign. You must come to a full stop at the stop line. After yielding and making sure the way is clear, you may proceed.

CORRECT ANSWER: C.
The flashing yellow light tells you to use caution when proceeding through the intersection. You don’t have to stop.

During low traffic, signals can be turned off and just flash either red or yellow lights. Should this happen, you must follow the rules for flashing lights (see above).

If signals are blacked out and not functioning at all, proceed as though there is a stop sign in all directions. Come to a stop, look in all directions, follow right-of-way rules, and go when it is safe.

Laws differ between states and a full stop may not be required everywhere.